While Iwaihime is nowhere near as ambitious as Higurashi and Umineko, it delivers the kind of story Ryukishi’s fans should love.

When one of the heroines got raped and impregnated by a giant caterpillar, then was torn to pieces by a giant bee, and ended up re-assembled as a caterpillar herself and then tried to devour the protagonist just as a giant monster that looked like a cross between Sadako and a deer crushed her for good, I almost thought Ryukishi had finally lost it.

However, as crazy as it sounds, it all actually makes sense after you finish the game, as Iwaihime is somewhat of a cross-breed between Higurashi and Umineko, where most of the horror and gore is just a metaphor (an interpretation of a broken mind) of what truly is happening in the story. If you loved playing the “what could this possibly represent in the real world” game in Umineko, you’ll love that in Iwaihime too. 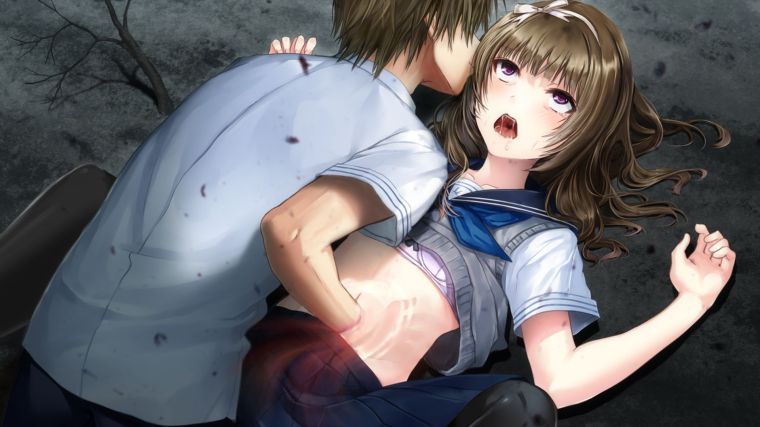 The story itself is about an ancient curse that consumes people’s minds from inside. All in all, a pretty traditional premise for horror in Japanese fiction, except that the plot is set in school since it’s a VN. It’s unfortunately — as horror genre usually is — quite predictable, especially after surreal stuff ends and you’re given the answers.

Yet, despite it all, Ryukishi manages to keep it all interesting from the beginning to the end with good fast pacing and likable heroines.

Contrary to his other work, I actually ended up enjoying the answer arcs more because they gave a lot of insight into the minds of the heroines, which, oh boy, hide a lot more fucked up shit than you’d dare to expect. My favorite was probably Eris in Tortureland, but the paranoid ex-hooligan girl who is trying to open a new page in her life by practicing to become a perfect cute bride was just beyond hilarious too.

It might not be the most memorable of Ryukishi’s works, but if you usually enjoy his stories, definitely give it a shot. If you don’t like Ryukishi, well, this game won’t change your mind.