A sequel to my previous attempt at translating a fighting scene from Dies Irae. As always, forgive me if my prose sounds lousy at times; this was done purely for practice, and is by no means a definitive translation of the work.

You can check out the subbed videos here:

An aberration swept through the scenery, and though fleeting and scarcely discernible in the present landscape, its advent staggered the two indomitable warriors, Rubedo and Nigredo.

For lo, the demonic castle had trembled! For a tiny fraction of a barely perceptible moment, Wewelsberg, that unassailable Valhalla, that hell forged from the skulls of millions, did quaver. An impossible notion, for if true

their Supreme Commander was likely in peril.

Her eternal devotion to her Lord caused a great anxiety to well within her, which for a creature of passion such as Eleonore was impossible to ignore. Heeding the growing dread in her heart, her thoughts strayed from the battle, and toward her master.

A brief distraction, which precipitated only a moment’s faltering, and yet…

Beatrice, for whom death was near, continually assaulted by the flames of Muspelheim enveloping her —

—had delivered a deserved punishment unto Eleonore. Pain flared in Eleonore’s neck, a fitting consequence for one who let their mind wander during battle. 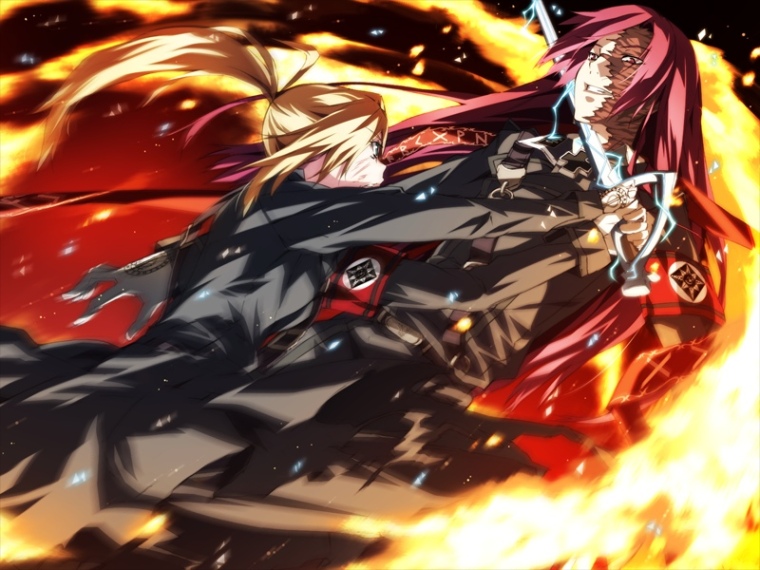 Eleonore: “But your sword-arm is too weak. Didn’t I tell you, you cannot best me.”

The sword of the Valkyrie bit deep into the neck of Eleonore. Blood spurted freely from the wound, and were it not for the oppressive heat produced by the surrounding flames, which promptly vaporized any offending fluids, both warriors uniforms would surely have been stained thoroughly crimson.

Beatrice: “So, I no longer possess the strength to…”

Eleonore: “Such is the reality. There is too great a difference between the density of our souls.”

Flesh had been sundered, muscle rent, yet bone proved too great an obstacle for Beatrice. To her, the vertebrae was an impenetrable barrier. She lacked the power to deliver a fatal wound to the crimson knightess.

Eleonore – “Still, I must commend you. Tearing through countless of Lord Heydrich’s men is a feat to be proud of.”

Eleonore – “You truly outdid yourself today. I am thoroughly impressed.”

Beatrice – “I wish I could appreciate your compliments.”

She couldn’t best her. Couldn’t save her.

Beatrice – “But I couldn’t liberate you from this hell.”

Beatrice – “This is the first time you’ve commended me or my efforts, but given the circumstances I cannot take comfort from your words. Your standards were always unbearably harsh. You truly were a merciless commander.”

Beatrice: But that is why!

Vigor returned to the waning Beatrice, returning luster to a figure which had been wan and fading, and infusing her voice with strength it had previously lost, allowing it to soar unfettered and full of conviction.

Beatrice: I am not done yet! My sword is still intact!

Her soul had yet to perish.

And though it may be for only a further second, for as long as she drew breath she would do battle.

Beatrice: I learnt this from you.

Beatrice: Even if I cannot free you —

Even if she lacked the strength.

Beatrice: If I were to yield here, how would I face myself, Major?

Beatrice: I was unable to save the people I love; my family, my friends, my comrades. My loyalty to my former commander — to who she was — is all I have left.

Beatrice: I have nothing else, Major Wittenburg.

Faced with the dolorous outburst of her former subordinate, the vigor and enthusiasm for combat drained from Eleonore. Instead, she resolved to console Beatrice in her final moments.

The fight mattered little, in moments Beatrice would wane and expire.

If circumstances were different, Eleonore would have bolstered the intensity of the flames which enveloped Beatrice, and brought an end to their conflict.

Eleonore: You are a foolish child! An interminable half-wit who will carry her callowness to the grave. And yet, you’ve developed into an admirable knight. It would be remiss of me as your former commander to not farewell you with respect.

Eleonore: Once you become eijenhar, return to me. I shall listen to your complaints then.

The cause of the demonic castle’s tremors still eluded Eleonore, but there hadn’t been any further strangeness. It was likely nothing significant.

The might of Lord Heydrich was unrivalled; there was naught in this universe that could harm him.

Receiving succor from these thoughts, Eleonore’s disposition lightened, and she stretched forth her hand to soothe the distress of her moribund former subordinate.

And in that moment, the sword of the Valkyrie revived and began to inch further into the neck of Eleonore.  Its blade, which hitherto seemed dull and forged from wood, was emanating such a cold, keen quality that it chilled the blood.

Eleonore’s surprise was mirrored in Beatrice, both astounded by the unfolding events. Eleonore’s body was strengthened by the untold legion of souls under her command, and for a simple sword to be passing through so easily defied all reason.

Beatrice lacked the power, and her sword was thoroughly unexceptional. 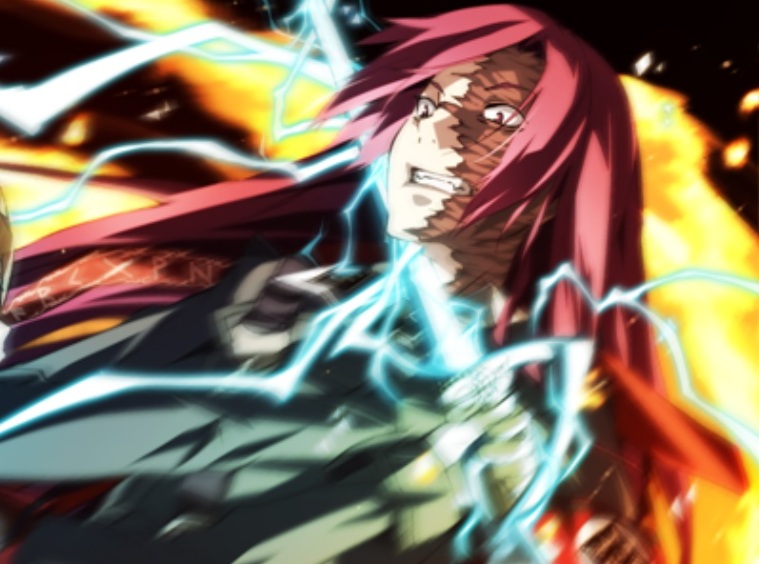 The wound that had begun to close reopened once more, and fresh blood gushed forth with the force of a raging torrent. The heat of the scorching inferno surrounding them was no longer sufficient to vaporize the entirety of the outpouring fluid, and Rubedo was splattered in crimson altering her appearance to now completely match her title.

Eleonore grasped the blade in both hands as she strived to force it away from her body. An instinctive action, one born from reflex, which accomplished little other than slashing her hands.

Eleonore: “What… have you done?”

Her mind was awhirl with confusion. What had occurred, why did her knees tremble?

For the sword she was struggling to check assailed her with a strength matching the entire Reinhard’s legion.

Beatrice: “It seems the young’uns saved me in the end.”

Drenched in the blood of her exsanguinating former commander, Beatrice adorned a smile bitter in nature.

Beatrice: “You were powerful beyond imagination. Were I alone I would have fallen regardless of how I struggled.”

This wasn’t her victory.

Beatrice: “I couldn’t shake your loyalty, your honor, or your pride. They remained steadfast till the end.”

Beatrice: “However, I am satisfied with what transpired here.”

Beatrice: “Kai, Kei… everyone came to my aid when I was in need.”

Beatrice: “And this alone reassures me. I’m certain I have not erred in my judgments.”

Major, are you happy?

Beatrice: “Do you have comrades to help you when you’re in a tight spot?”

Discourse was an onerous task for Eleonore. And yet, with her trachea severed and blood gushing into her mouth, she still managed to summon forth a snarl in reply. She would brook no questioning of the path she walked.

Eleonore: I care not for such trivialities! I have only one desire!

Eleonore: To serve Him as his Rubedo, to act as the claws and fangs of the Beast, to become a champion worthy of His grand ambition!

Eleonore: “To belong to Lord Heydrich is everything to me! I desire no redemption! I desire no saving! I cannot afford to falter while serving at his side!”

Eleonore: “My fervent wish is to be with him eternally. The day of Dies Irae, the day we become one, is my Valhalla!”

Beatrice: About time you showed your true colors.

If she could have discerned her feelings sooner, or met Him under different circumstances, she may have escaped this fate.

Beatrice: In the end, despite all that was said, you were a woman following her heart, Major. And you belittled our kin only because you were loath to admit it.

Beatrice: Isn’t it a wondrous feeling, to accept your own femininity?

A smile graced the lips of Beatrice as she acquiesced to the will of the soul inhabiting her sword. A soul that demanded she execute, through decapitation, the one standing in front of her. Beatrice steeled herself and gathered the last of her strength.

To resist was pointless.

Muspelheim was crumbling. The barrel of the cannon that contained the inferno had split, and the flames were assaulting the perimeter of the castle.

Eleonore: “I will revive in time, and once I do we shall continue this.”

Eleonore: “In the interim, don’t think I’ll allow you to escape. Perish with me!”

Beatrice: “Of course. I will keep your company wherever you go.”

Beatrice’s sword finished its journey and sent Eleonore’s head soaring into the sky.

Eleonore: “Sieg heil. May victory be yours, Lord Heydrich.”

Muspelheim erupted into flames. An explosion which threatened to shatter the walls of the demonic castle was perhaps an appropriate way for the purest of all women, for one so passionate and sincere, to leave this world.

And though she was immortal, an eternally resurrecting einherjar, she still suffered a kind of death here.

Beatrice saluted her old lieutenant for one final time.