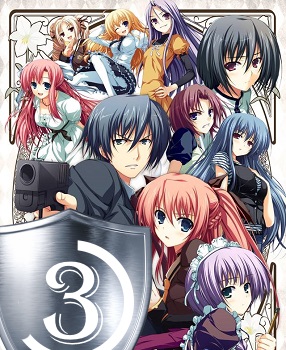 While Akatsuki no Goei (Dawn Safeguard) is the third visual novel written by Kinuga Sashougo (衣笠彰梧), it is the first one where he finally appears to go all out at. It follows a nihilistic slacker bodyguard who hides his real talents to evade hard work and gloss over his otherwise very dubious history. The situation naturally leads to endless comedy, great action and some amusing light-hearted romance. It really never gets old seeing the reactions of everyone as the “proven loser” suddenly saves the day in style when the situation turns out seemingly hopeless.

However, while it’s one of the most entertaining  visual novels I have ever read, it’s also one of the most disappointing at the same time. Top-notch humor, charming characters and the intriguing premise are marred down by incomplete, sometimes even incoherent story.

At the beginning it seems you have it all: constant suspense from hiding one’s identity, a good drama setup with many shiver inducing scenes where the protagonist shows flickers of his gruesome upbringing, genuinely funny comedy from his hilarious attempts to deliberately piss off his employers to get himself fired, and finally even some nice bittersweet romance on the side. Then once the protagonist’s past starts catching up to him, and it seems all the hell is about to break lose in the city, you naturally start thinking you have a masterpiece in your hands, ready to blow your mind just about any minute now… and then it just ends… and credits roll. Basically, you get the biggest visual novel blue balls since Sore wa Maichiru Sakura no Youni fiasco.

To fix this, two sequels were released, but as if to spite us, both of them were incomplete too! They introduced new plot points without resolving the old ones, and their plot fizzled out before delivering a satisfying all-wanted grand conclusion to the initial set-up. The third installment is particularly disappointing as while it finally seems to end the story, you can just feel that it was rushed with parts of the plot blatantly missing and a billion new unnecessary and underveloped characters diluting an otherwise fantastic cast.

I still highly recommend Akatsuki no Goei as every second I was reading it was a well-spent one. Kinuga has a knack for writing good comedy and coming up with interesting concepts, so I really hope to see more hilarious works from him in the future… that he actually finishes properly this time. Akatsuki no Goei could have easily earned five stars from me if it managed to conclude itself in the same fashion it started.